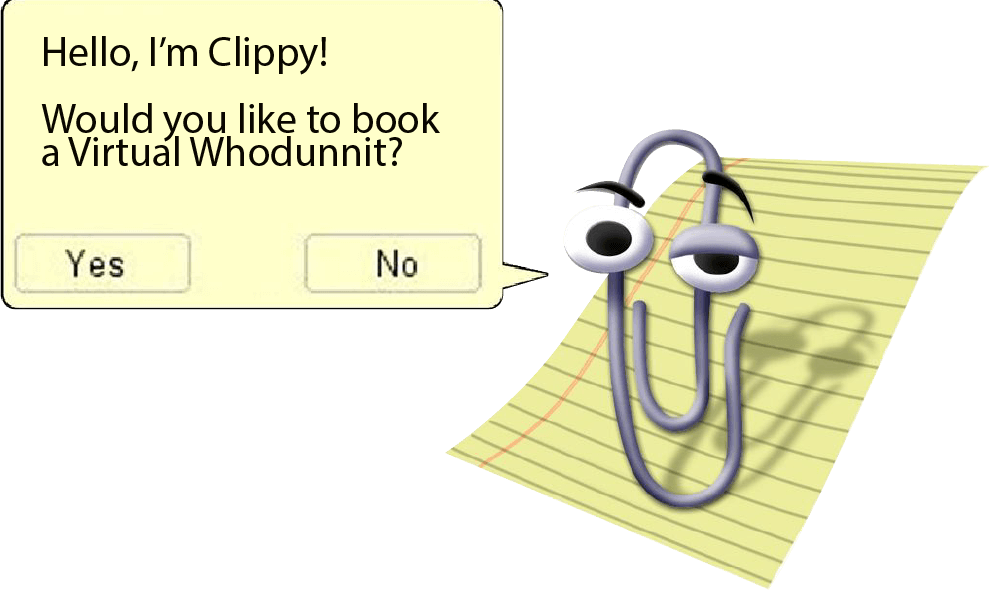 A Virtual Whodunnit | The Y2Kaper

Do you miss the 90s? This Y2K inspired virtual whodunnit will have teams competing to help save the world, and have fun while doing it! 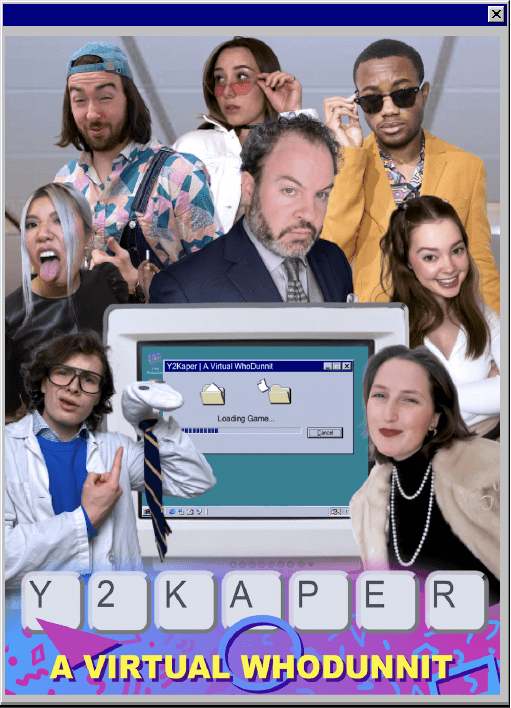 Players at a Time

Ahh, the ’90s. A joyous time, full of pizza rolls, stable economies, and Friends viewing parties… that is, until the Y2K Bug reared its ugly head. Every computer around the world was a ticking time bomb, ready to fail. Well, all except for one: Haarmonics 99. Developed by Haarmon Technologies, the security software promised to prevent the Y2K Bug, saving the new millennium from sure disaster.

However, mere hours before the tech giant’s grand reveal, a shocking discovery was made: every floppy disk containing the cutting-edge security software was missing. This is where you come into play. In teams of 8, players will take on the role of the infallible ‘90s PR agency, Perfect Records, who have been called in to discreetly handle the situation. It is your job to interrogate the suspects in real-time; Cross-examining their alibis over 3 rounds of live interactive theatre before ultimately submitting your best guess for both the Culprit and the Motive.

Can Perfect Records PR figure out who sabotaged the launch of The Oracle?
Put you and your colleagues to the test in order to solve this workplace whodunnit!

Best virtual experience yet to date! I did this with my MBA class of 100+ and it was a blast and a half! Lots of laughs, the cast did a phenomenal job with living the role and the plot was so well thought out

The highlight was being able to enjoy the experience from the comfort of my own home, with drinks, snacks and notepaper, yet it still felt like being engaged with a group.

It was a lot of fun! The interrogations were my favorite part. And, coming back together regularly as a team helped us put the pieces in place.

The acting was an amazing balance between providing the information needed to solve the mystery, while still providing enough alternatives to make it a challenge!

I absolutely LOVED this experience! I'd love to do it with all my friends and family! So much fun!! Well done.

Still Have Questions About Our Virtual Whodunnits?

FAQ
How can I book an Virtual Whodunnit?

If you'd like to set up a walk-through of the options or demo of the experience, reach out us via our Contact Form below let us know. If you know which experience you want to do and are ready to book, e-mail us with your preferred date, time, and number of participants and we will get back to you within 24 hours with confirmation!

Will I need to dress up and act as a character?

No! We have a team of professional improv actors who will be the characters. You and your team will be tasked with interrogating them to find out who the true culprit is. However we do encourage attendees to dress up in-theme to immerse themselves in the experiences as well as score them bonus points during the game!

Do you have a minimum number of participants?

Yes. Due to using live hosts, facilitators, and in some cases live actors, we do enforce a minimum group size of 40 to justify the cost inputs to operate our experiences. Should you have a smaller group but are willing to cover the minimum, we would be happy to host you!

What platforms do you operate on?

We have built all of our experiences from the ground up using Zoom as our platform. We can accommodate up to 120 people for our murder mysteries, and are often able to run multiple events simultaneously for larger groups. At this time, we are unable to offer our experiences on Google Meet, WebEx or Microsoft Teams due to the limited functionality they provide for our games.

What are your operating hours?

Our team is located on the east coast of North America, and can accommodate groups from all time-zones between the hours of 9am - 10pm EST (regardless of where you are located). We can offer games on weekends on a case-by-case basis - please reach out to us if you would like to enquire!

Our Experiences have a minimum of 30 participants. Group discounts are available.

Contact Us
Thank you! Your submission has been received!
Oops! Something went wrong while submitting the form.
No items found. 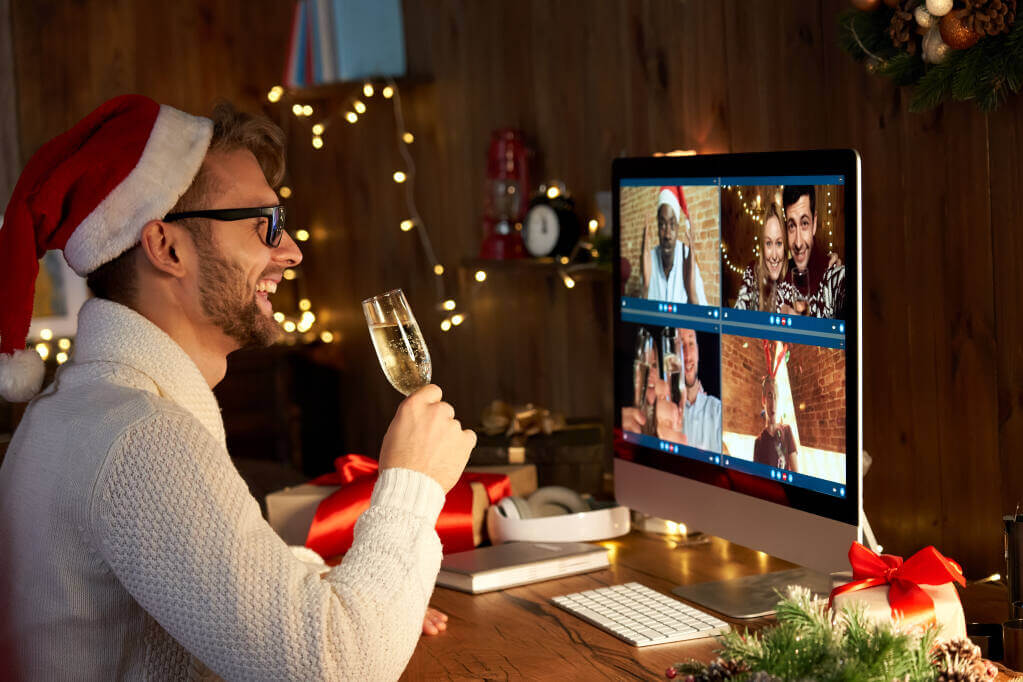 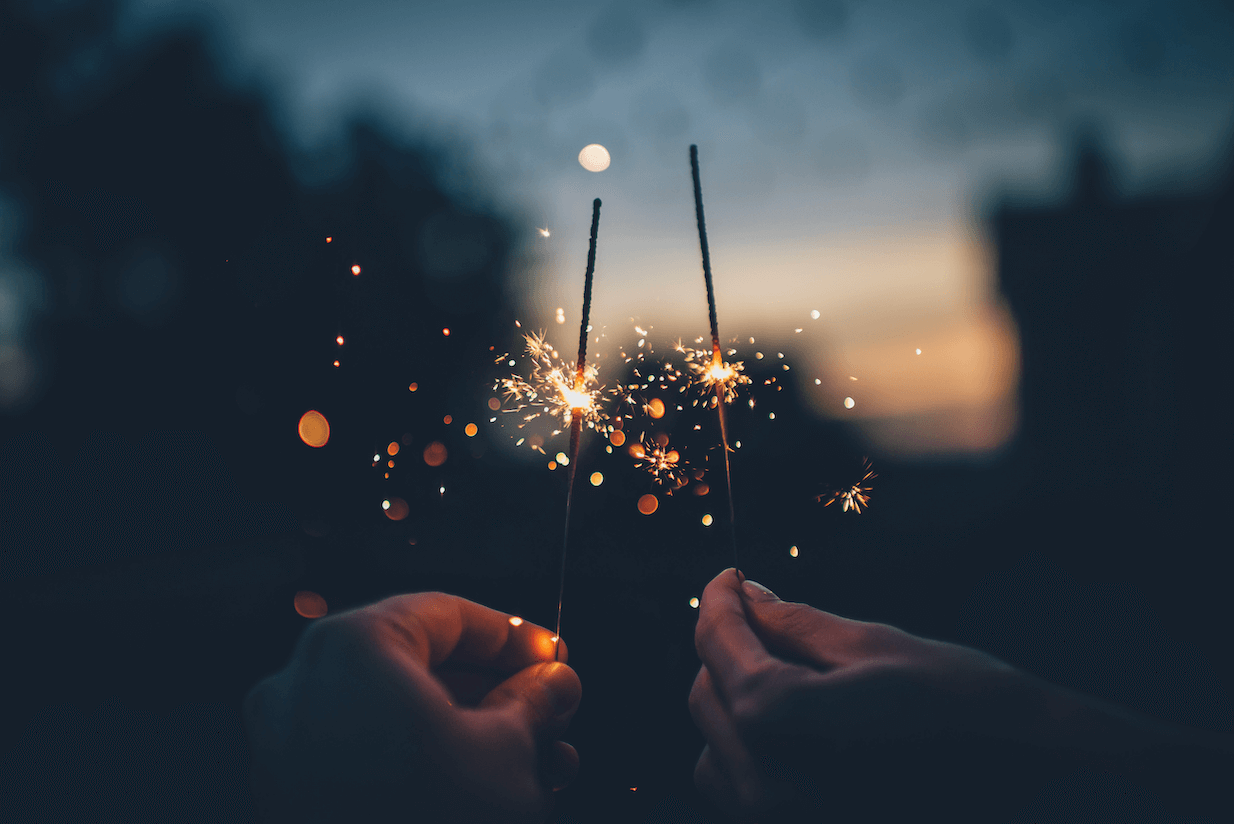